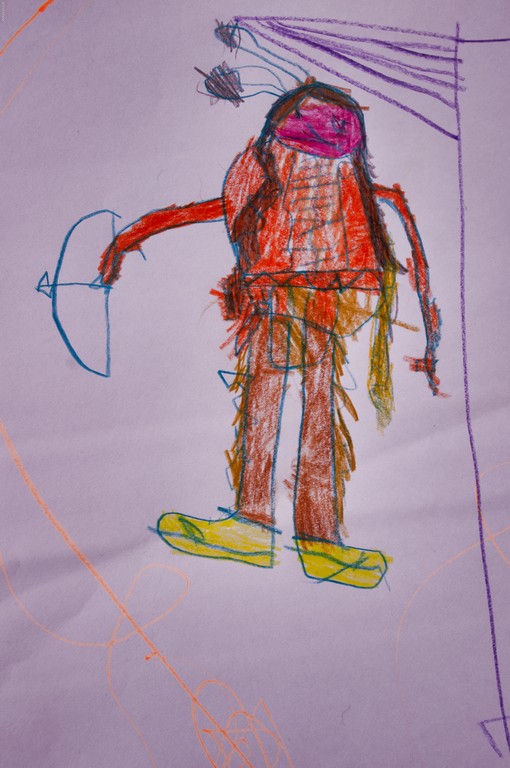 It must be a difficult thing to be constantly driven to pursue money and attention-I don’t know how Russell does it.

I guess with as much practice as he’s had it has become second nature and  he thinks it is a normal process.

Recently I was sent a link to one of Russell’s homages to himself-in this one he poses in a what looks like a fresh out of the box apron, and in the best of infomercial presentations smiles innocently at the camera as though pleasantly surprised unexpected company has dropped by and launches into the equivalent of excuse the mess I’ve just been pouring my heart out as a starving and tortured artist to express my vision on canvas.

All that was lacking to round out the effect was a beret, but I guess wardrobe didn’t have one-maybe makeup would have been well advised to add a smear of paint or two on the apron as well.

The three stooges gave better performances than this-though his may rival theirs in the sheer hilarity of the props employed.

Art? I have an appreciate for it-like most people some styles have a greater appeal to me than others, and I admit I am sometimes confused by what is labelled as art.

No such confusion regarding Russell’s version though-this isn’t art by any stretch of the imagination, any loose interpretation of the word.

It is commercialism, devoid of any appreciable talent, a  shameless pursuit of the dollar.

Hard times at El Rancho Means-the governmental well of grants has dried up, as has those Hollywood roles, donations for such non existent entities as the immersion school, the “band” and the recording venture were an abysmal flop, and Ron Paul doesn’t pay for endorsements.

What’s a patriot to do other than pander and scavenge, attempt to keep their name out there in any way possible, and turn a buck at the same time. Necessity, the mother of invention.

This latest offering is like one of those Ginsu Knife commercials, the only difference is I’m sure the asking price is more than 19.99 plus shipping and handling.

The avatar I use on this blog was created by a young man by the name of Mahpeva, who at the time was of preschool age-I submit there is a greater integrity, talent, and value in it than anything Toulouse Laumeans will ever be capable of.

Including the infomercial link as I think everyone needs a good laugh now and again.