ONE DROP AFTER ANOTHER 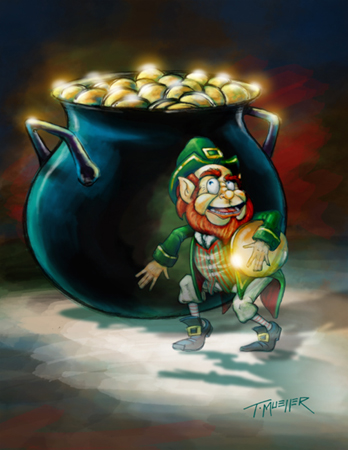 I’ve always been inclined to view Leprechauns as mythical beings, a fable like the pot of gold at the end of the rainbow – but I’m beginning to have second thoughts about that.

Some people just seem to have an over abundance of “luck” – people like the AIM leadership, or Dave Hill -too much in fact to merely be coincidence or serendipity regardless of how many four leaf clovers they might have – how many lucky charms.

They’ve got more mojo than Austin Powers could ever dream of – doesn’t matter the circumstance, how dire the situation, how serious the crime, they always manage to come out unscathed.

Of course there can only be one Austin Powers and not everyone has a classic E type Jag to tool around in, so a substitute is in order, and depending on locale and the expectations of the audience leading a horse as one steps to the microphone and camera could be an effective alternative.

It’s all about theater, the script and props have to be appropriate to the genre if the coveted B grade performance is to be awarded. Anything less would be too transparent and fail to make the youtube cut.

Austin Powers is a funny guy, laughable and nowhere near as suave and cool as he thinks he is – that’s what makes him laughable as it’s easily recognizable. you don’t need to be a a film or play critic to recognize a low budget entirely forgettable performance line those that come from the AIM studios.

I guess that’s why the bad actors of AIM keep churning them out….they’re aware of the poor quality of their product and the need to flood the market hoping people won’t forget.