WOMEN ARE WARRIORS TOO 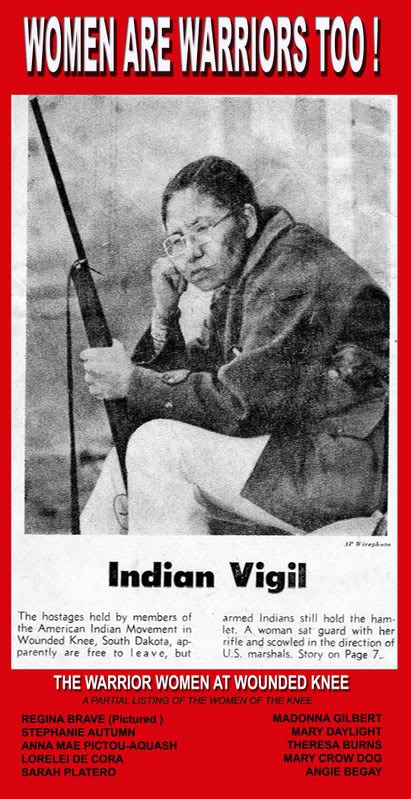 No doubt can possibly exist that the women of the nations have been warriors and remain so to this day as a matter of necessity related to some of the issues they face.

The thing about posters such as this and even photos is the manner they can be manipulated, not a difficult task with editing programs to delete a name for example.

Unretouched, as in the example provided above, the name of Annie Mae Pictou Aquash is included, when you view this on different occasions the expectation is you will see it along with the other names – though there are names on this list with a direct involvement of a bound and beaten interrogation of Annie that should only be featured on arrest warrants and court dockets.

As this appeared on Last Real Indians Annie’s name was missing though – not something accidental, or glitch related – intentional.

The kidnapping and murder of Annie wasn’t accidental, it was planned and deliberate, just as removing her name was.

As was pointed out no response from LRI was forthcoming, it may be that it has been addressed, as I seldom visit the site – if so I nonetheless have archived it as it appeared along with the date and time.

LRI is in my opinion among other things an AIM satellite – you won’t find a disparaging word there related to anything AIM or it’s leadership.

When mention of Annie was made by a daughter of her’s she was informed that the founder and chief selfie posters focus was on the youth, as our though murdering a woman isn’t something our youth should be aware of.

Whether this abbreviated list was the work of LRI or a poster is secondary to the consideration that if LRI had nothing to do with it they should of in the least added a codicil with Annie’s name.

The fact that they didn’t speaks to the orbit they maintain which is AIM centric in nature.

Posters, bling, and selfies may capture the eye and attention of viewers, but it seems to me that if issues are to be addressed related to the nations more is required – more than hopscotching around the latest twenty four hour news drop.

If historical events such as treaties and battles are germane to the larger picture then so too is the murder of an indigenous woman and other victims by AIM.

Of course the standard has been if you would address such things then you cannot possibly be a last real Indian – I say the opposite is true if you refuse to.

15 comments on “WOMEN ARE WARRIORS TOO”