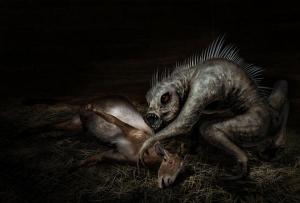 Call me a malcontent, pot stirrer, or whatever you like but the more I learn about the Star Knowledge crowd the more outrageous it becomes and the more I wonder how anyone can buy into anything they’re selling.

The reference to communicating with Chupacabra and discovering it suffers from loneliness after being left here on planet earth is riotously hilarious, but not to worry as the “Pleiadeians” and select Star Knowledge representatives are on top of it.

In my opinion this is a prime example of cultural genocide driven by a desire for attention and monetary gain – at one point in the “interview” mention is made that a lot of indigenous people aren’t buying into the snake oil, that should be a clue for the non indigenous who may actually believe they’re privy to the “sacred” knowledge and teachings of the nations for the price of admission.

What they’re buying into is something akin to one of those cheap b grade sic fi movies common in the fifties, and if they think they detect the odor of bullshit they’re right.

Maybe I’m wrong though, maybe that giant tarantula or  “Them” of b grade fame really were left here by other worldlies and the Pleiadeians just hadn’t gotten round to picking them up yet.

Hopefully the “grandpas” will address that at one of the pay to pray gatherings.

I’d write more related to this but short on time as I’m scheduled to board a UFO and assist in creating some crop circles.