FAKE NEWS AND GIVE THE GUY A CHANCE 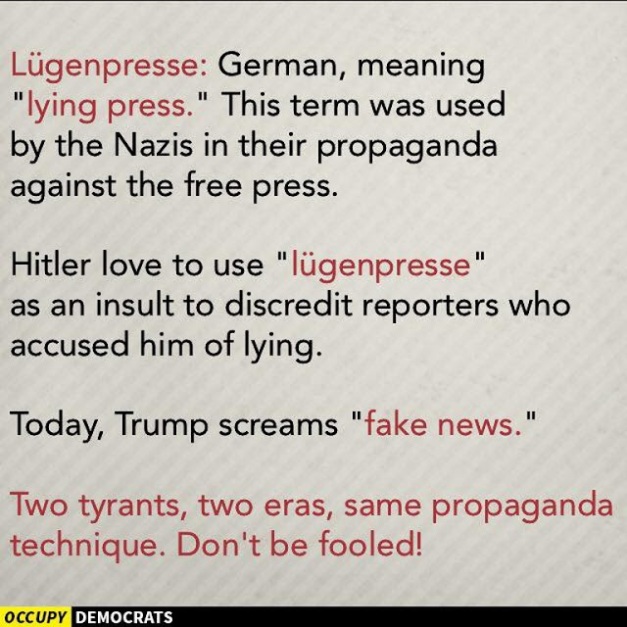 “To announce that there must be no criticism of the President, or that we are to stand by the President, right or wrong, is not only unpatriotic and servile, but is morally treasonable to the American public.”

I was at a lumber yard the other day and overheard a conversation between a couple of men – one was going on about fake news and giving Trump a chance and the other was taking him to school.

What I found interesting was the level of denial accompanied by a noticeable uptick in the decibel level of the Trumpkin when confronted by facts which he could not counter  and ultimately led him to storm out to his Trump bumper sticker ladened truck and roar off.

The truck was almost as much of a trip as the Trumpkin – it had the obligatory make America great bumper stickers, America love it or leave it, Lock her up, and of course  to round out the ensemble a flag attached to the antenna.

Oh, and did I mention the camo hat and t shirt with an eagle imposed over the flag the trumpkin was wearing?

All in all it was a pathetic performance by a man who interspiced his attempted rebuttals with words like patriot, which he proclaimed he was at least a half dozen times, and the Constitution.

What’s a little confusing is a couple of weeks prior I had seen this same man in a convenience store holding forth but the gd corporations and how it was tougher and tougher to make ends meet.

Apparently he’s oblivious to the fact that Trump is the poster boy for corporations and things are going to get a lot more tougher.

Or possibly, and more likely, he isn’t familiar with the words fact checking – facts can be very unsettling and chop a fact free argument off at the knees.

When  circumstances do get tougher I imagine he and his brethren will find a way to assign blame other than where it belongs.

When it comes to fake news and the trumpkins the amount of material is as infinite as the grains of sand on a beach and rather than have this particular blog run into the thousands of words enumerating them I’ve opted to let the above images speak for themselves.

In a way I feel kind of sorry for the man, he’s a working man out trying to earn a living for his family, I respect that – he no doubt feels as though the government has become deaf, dumb, and blind as a great many on both sides of the aisle do, as I do.

But the separation between he and I begins and ends with his belief that Trump represents good times and Christmas all wrapped up in one – that Trump will actually adhere to Constitutional principles, the law, or do a single thing he and his family will benefit from.

2 comments on “FAKE NEWS AND GIVE THE GUY A CHANCE”