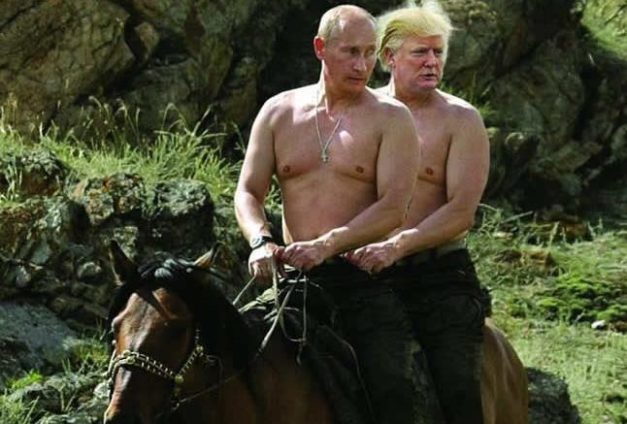 I don’t know, but to paraphrase Trump “many people” are saying this bromance thing between Trump and Putin is beginning to look like a sequel to the movie Broke Back Mountain.

Seventeen intelligence agencies have said as the result of ongoing investigations and evidence gathered during those investigations that Russia made an effort to influence the election to secure the Presidency for Trump – and that includes bipartisan committees – key word, bipartisan.

The question can only follow …… why? What is it Putin sees in Trump, what advantage does he believe he’ll gain?

What’s under the table or behind closed doors the public has yet to learn about?

Of course the “patriots” who are up Trump’s would deny this even if Trump and Putin issued a joint statement to that effect.

Who can forget Trump’s statement that he could shoot someone and his supporters wouldn’t bat an eye?

Instead of voting for a candidate who would truly drain the D.C swamp and curtail corporate access and influence they voted for Swamp Thing.

Kinda bizarre that you would cast your ballot against such socialist reforms and opt instead for the fascism that Trump represents .

Well, the chickens are certainly coming home to roost with the latest expose related to Debbie Wasserman Schultz the long time lap poodle of the Clintons and manipulator within the ranks of the DNC.

Increasingly difficult even for the most ardent of supporters to deny that the system is indeed rigged, that it is a misnomer if not a blatant lie to characterize the DNC as “democratic”, and that every reason exists to believe this latest revelation is merely the tip of the iceberg.

Inspite of the difficult deniability factor and campaign long negative polls of a lack of trustworthiness will this make a difference to Hillary’s supporters?

I doubt it as it is singularly about party allegiance and the fact that Clinton is a woman.

Breaking barriers and glass ceilings indeed, while no mention is made that the barriers were seen to be the obstacle of honesty and integrity – something woefully lacking in the House of Clinton, the Clinton Foundation, and politics in general.

And Wasserman Schultz being the ever faithful companion and with no room to deny or plead the now infamous Hillary line of she “misspoke” bites the bullet and takes one for the team while Hillary publicly congratulates Wasserman for her service.

Public praise, another in your face middle finger by the distinctly unqualified and stereotypical Washington insider.

My sincere hope is Sander’s supporters contest the coronation of the would be queen, that they do what the deny Trump movement attempted to and vote their conscience.

Any one who is dismissive of the Drumpf’s chances of winning may be in for rude awakening – an awakening not based on Trump’s “message” but a rejection of everything Hillary Clinton has come to represent.

What a miserable state of affairs when the choices boil down to two pathological liars who have spent their careers manipulating and stepping upon anyone who got in their way……way to go America.

HILLARYS AT IT AGAIN

The entire  Hillary Clinton campaign is resorting to her old tactics in an attempt to marginalize Bernie Sanders.

Sanders has a D- NRA rating, does that sound like he’s opposed to gun control?

If he isn’t where are all those gun toting’ “patriots”, why haven’t they crossed over?

Hillary is not only desperate but mentally challenged if she wants to attempt to compare voting records with Sanders.

During the 2008 primary season the DNC sponsored 26 debates – during this season there have been 6. The question to ask is if the DNC isn’t fully behind Clinton and attempting to manipulate the outcome then why so few?

Hillary did exactly the same when she ran against Obama in 2008.

“I find it ironic that Clinton is arguing that Bernie’s plans won’t work because they can’t get past Congress, while at the same time attempting to distinguish herself from Bernie on their respective gun stances. Gun control, which couldn’t pass Congress when 90% of the public wanted it, but that is what she claims she will be able to accomplish.
And how exactly after this scorched earth tactic does she intend to offer an olive branch to disaffected voters? “ 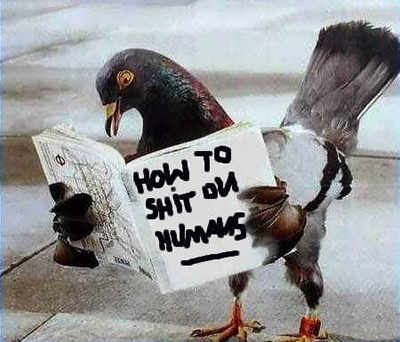 To begin with it’s necessary to consider the venue and the composition of the audience since skilled insider politicians craft their approach to such as to be well received.

So some part of the equation is Hillary did just that with her speech at AIPAC, but a part of this equation is also revelatory in that Clinton has returned to her roots in a display that brings into question her attempted emergence as an agent of change in this election cycle, a “progressive” and “reformer”.

When push comes to shove Hillary is more than willing to kick Obama to the curb disassociating herself from his policies while alternately praising them and accusing her opponent Sanders as being anti Obama.

Most notably in the midst of claiming not to be a friend of, or beholden to corporate sponsors while announcing that Obama had been the recipient of more super pac money than any candidate in history, and now this.

Clinton reminds me of a homing pigeon, she may soar through the atmospheric nuances of Orwell’s Newspeak but where she abides and the fact that she will return to the roost is a given.

It’s reasonable to argue that no requirement exists that a candidate seeking the office of their predecessor needs to be a clone, and I would agree with that premise, but the alternating game of an Obama love fest and a one eighty turn has become more than opportunistic and increasingly obvious.

There are two possible realities – Clinton challenged Obama for the presidency because she either didn’t believe he was “ the one” and stood at odds with his perception of where the nation should go, or her sense of entitlement was such she believed the presidency was her due.

This sense of entitlement has emerged again and Obama might be well advised to watch his back as Clinton plays her game of political musical chairs.

Consistency is or should be a consideration when ballots are cast – Sander’s has been consistent in  his stand against inequity throughout his entire career from the local to national level – it behooves the voter to take a look at Clinton’s record of consistency or lack of it and make an intelligent choice when casting their ballot …… that is unless they believe as she apparently does that the presidency is her due.

The second link is about Sanders’ commonsense approach to the issues that exist between Israel and Palestine – short of another war it is the only workable solution and speaks once again to equity and the political “revolution” that needs to take place in this country.

As an indigenous person I am pro sovereignty and believe that both the Israelis and Palestinians have a right to a secure and sovereign homeland.