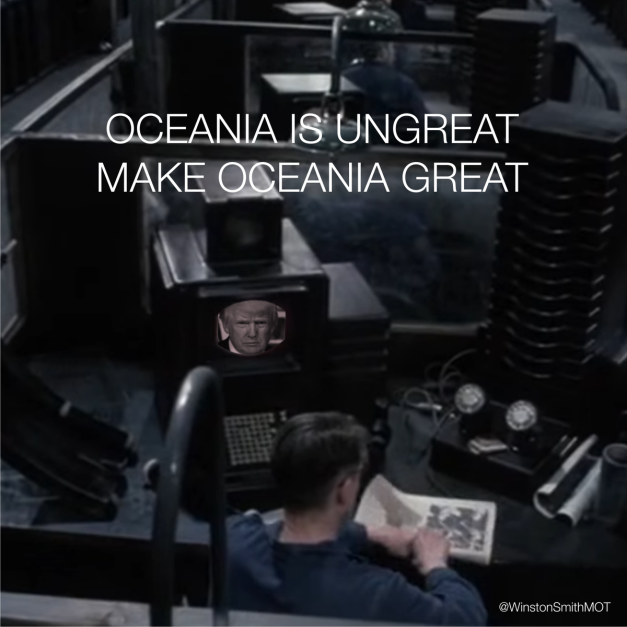 I suspect that I along with a significant number of other people spanning ethnic demographics populate the proletariat class – or as defined in Orwell’s 1984, proles.

Proles according to the dictionary are members of a class of industrial wage earners who earn a living by selling their labor.

Selling their labor, that covers a pretty broad spectrum from flipping burgers to mowing lawns or swinging a hammer.

Any labor done with honest intent is itself an honorable pursuit, and men generally are defined by their willingness or lack of willingness to work.

Personally I don’t have much use for a lazy person who will seize on any excuse to validate their inertia be they a man or a woman, and I know a few who do just that and do so shamelessly.

Even so I have less respect for CEOs with bloated salaries and haven’t a callous or blister on their hands to show for it.

The obvious answer is no and leads to the question of why is a livable minimum wage such an issue, what is the basis for opposition?

Is it that Proles are Proles, members of a caste system and must remain so?

Is it that a common laborer or one who earns their living by the sweat of their brow and aching muscles is the American equivalent of India’s “untouchables” who can pray at the temple but never enter it?

By virtue of birth are any more worthy, more entitled? How about by virtue of religion, geography, race, culture, or any aspect that contributes to the diversity that is humankind – are any inherently superior to others purely by accident of birth?

Is there a human birthright and if so what is it? Is it equal opportunity, access, and a level playing field? The ability to get ahead rather than remain static or falling behind?

How about respect and a person being secure in their privacy and pursuits if doing no harm?

If that sounds familiar it’s because in this country it’s part of a bill of rights and allegedly the way it’s supposed to be.

America has become George Orwell’s Oceania as the language of Newspeak and alternative facts becomes the norm – a language “designed to diminish the range of thought” and Ownlife is considered a crime.

What Trump and his gang of three – Conway, Spicer, and Bannon have forgotten is that any nation worth it’s salt is one composed of individuals who in their individuality find a common language and common goals – not Unpersons who can be ignored and written out of history or the national dialogue.

Homan has commented on this blog in the past, comments that I thought were insightful, but at the same time knew little about her or the backstory.

I recently ran across the below linked article and believe it is a tale of survival and the “keep punchin’ ” philosophy I adhere to – don’t quit, if you can’t beat them straight up then outlast them.

Some times it may be easier to throw the towel in, to just give up and accept whatever comes your way – you may or may not like her style but I love a fighter who says in the face of adversity enough is enough and keeps getting up.

Life is for living, not submission, you either stand or bow and crawl – no one owns the world or it’s resources, and no one by birth, position, or ethnicity is better than anyone else.

The wealthiest are no more entitled than the poorest, nor the intellectual as opposed to the illiterate or less learned.

“Civilization” has a long history of being anything but civilized – more wars and deaths have resulted from religious differences than any other reason and I don’t give a damn what religion it is, that is the bare naked truth of it.

Classism and caste systems are a global reality as Homan points out- poverty is seen to be a personal fault and the impoverished members of a lepers colony to perhaps be “pitied” from a distance for fear of contamination, and alternately blamed for being a burden.

Throw just enough money at them to keep the lid on, to maintain the level of poverty and insure a corporate and employers dreams of a cheap easily manipulated work force.

Trillions in national debt, hundreds of billions on defense and foreign wars- free education, free medical, free everything following the invasion of  another country under the aegis of “nation building” but not so here as that would be socialism and dramatically alter the landscape.

Trade agreements that destroy jobs, enrich the wealthy, and fortify the gap between the haves and have nots.

Homan speaks of herself at times as being too old, and yet demonstrates that no one is ever too old to raise their voice, never too old to attempt to pay forward what they have be it large or small, never too old to continue striving – I think there’s a lesson in that people should take to heart.

But this blog isn’t just about Jacqueline Homan – it’s about every disenfranchised man, woman, and child in poverty – every woman among our nations or any nation who has been a victim of human trafficking in any form.

The most generous people I have ever know are those with the least – it’s easy to give when you have more than you need, but not so easy when you don’t, or to give in the midst of your own need.

I think Homan would do well to keep kicking ass and taking names, and I’m inclined to believe she will.