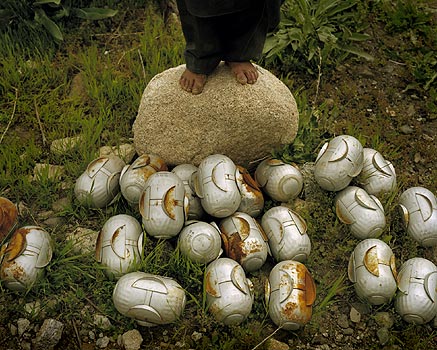 I‘ve never been one to advocate for war as the first option, but I believe there is a global responsibility to protect civilian populations,especially women and children.

A responsibility the United Nations has historically failed to do with numerous examples that can be provided.

The latest attack by Syrian forces using cluster bombs in Deir al-Asafir on a playground filled with children, which apparently was on the target list, should serve as impetus for nations such as Russia and China to set aside their geo-political agendas and begin to think in terms of humanity.

The world is tearing itself apart not only on the local, but national, and international levels-when a government or  leadership indiscriminately attacks it’s own people in my opinion it’s time for a global response.

Something more than resolutions, speeches, and political rhetoric.

We as indigenous people know all too well the horrors genocide, of slain and broken children and women, of razed villages, and the death of innocence- having experienced these things even at the hands of our own, such as AIM’s assault on WK2.  Our own experiences should be enough to raise an outcry among us in support of the Syrian people.

It angers me even more that a rogue organization like AIM  has supported rogue governments, terrorists groups and nations states- all while saying we are all related and they want only the best for their people.

The Syrian government needs to be taken down, arrest warrants issued for them, and dragged before the World Court and tried as the criminals they are.

I’d say that is fitting approach to AIM and it’s leadership as well.

Had good men risen up in unison AIM’s Reign of Terror would have been very short lived- if good men would rise up in unison now AIM and the gangs that prowl the rez would be ousted, women and children would no longer be abused or raped,and the presence of alcohol or drugs would in the least be minimized.

If you haven’t seen the video provided in the below link be warned it is graphic in nature.