SYRIA MISSILE STRIKE AND DO ALL LIVES REALLY MATTER? 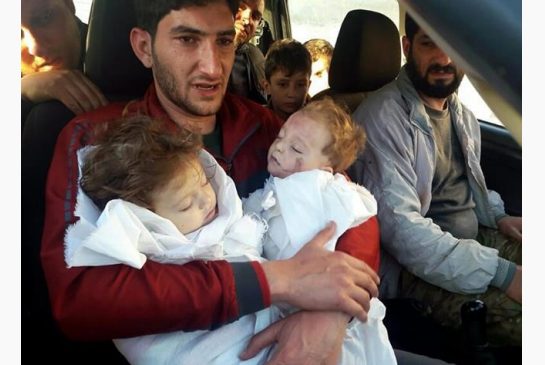 The situation in Syria is a mess and the U.S. entanglement incoherent – even the public seems to have difficulty forming an opinion on what to do, this of course mired down with the blind albatross suspended from their neck of my party right or wrong.

On the one hand all decry the slaughter of an unarmed non combatant civilian population that includes infants and children dying from chemical attacks.

This while paying lip service to the regrettable “collateral damage” of civilian deaths.

In the midst of calling for diplomacy and negotiations it should be obvious after years that neither is going to work – this “war” is one being conducted by proxy.

On the one side you have Russia and Iran and the other the U.S. and it’s allies.

I don’t know but it seems to me there are only two options – if you would champion the cause of refugees while denouncing the murder of innocents you either act or turn away.

While I have an issue with the current Trump administrations position regarding accepting refugees I have no such issues with the missile strikes directed at a despotic Syrian regime.

I in fact believe it should have been a concerted effort by multiple nations if the information is correct until the targeted airfield no longer existed and to hell with whether it gave Russia and Iran a wedgie.

The so called Iranian deal between the U.S. and Iran has amounted to nothing but a farce and more verbal hash slinging.

But you know what’s really bizarre in all this is the conservative response has always been to use force in any given situation, they want to bomb and muscle people, now the meme is they’re disgruntled and abandoning the Trump Titanic due to this missile strike.

But I suspect it’s more than that, it’s an awareness inspite of all the wool they voluntarily pulled over their own eyes that Trump is an idiot and never should have been elected in the first place – buyer’s remorse if you will.

Now after having painted themselves into the proverbial corner and casting about for purpose and meaning for their political ideology they are left only to crawl into bed with the alt right group and ramp up the conspiracy theories – validating perhaps the adages that you can lead a horse to water but can’t make it drink and that an old dog can’t learn new tricks.

Now it’s about Assad had nothing to do with this , some “deep state” bullshit that ignores Assad’s history of employing the identical tactic in the 2013 Ghouta attack that killed over a thousand men, women, and children.

Now conservatives have become defenders and closet apologists for Assad and by extension Russia and Iran – in effect aiders and abettors.

Take a look at the below linked video and then tell me what you think should be done – should we ignore the death of children such as these as this nation drones on about “American Exceptionalism” and being a “champion” of human rights, and if so for what reason?

Black lives matter, lgbt rights matter, animal rights matter, who gets to use what bathroom matters – name it and somehow it all matters , but apparently the lives of innocent children in a nation led by a common thug and war criminal supported by other thug nations like Russia and Iran somehow aren’t quite as important.

Why is this important to me? Because of the unacceptable similarity of what the children of our nations experienced while the world stood by and offered the occasional tsk tsk and meaningless rhetorical glossolalia emanating out of both sides of their mouth.

A global community willing to fight to protect them.

So spare me the faux liberal outrage and kumbaya and spare me the equally faux conservative bullshit related to this missile strike and try to begin acting like all children’s lives matter – that a child’s right to life is more important than a bathroom or whether a pet receives an Xmas or birthday present.

ACID REFLUX AND ONE TRICK PONIES

Thank you Jesus? I think they meant Thank you Gucifier.

I suspect that at some point if it hasn’t begun already Trump supporters as a demographic will be plagued by acid reflux on an epidemic scale, such is the amount of bile that keeps backing up.

They’re getting a little bewildered by the antics of their boy, confusion is growing as they attempt to follow dear leaders example and pass the buck everywhere but where it belongs.

Trump’s infantile mea culpa of don’t blame him for acting like an idiot and making false accusations based on something he “read” or “heard” presents an uncomfortable moment of looking in a mirror and knowing they’ve done the same thing.

A reality that makes it difficult for them to complain without pointing the finger at themselves as well – so following the path of least personal resistance and accountability they find the role of sheeple infinity more comfortable – that spoonful of sugar to help the medicine go down.

Easier to insist there’s a bogey man under their bed or in their closet than such things are pure fantasy.

But I’ve come to understand it isn’t just a lack of ability, at least for some number of them, it’s survival instinct, a defense mechanism to avoid having to confront reality and the manner in which they facilitated it.

The problem with Trump that’s going to come back and bite them squarely in the ass are the tantrums he has – if he doesn’t get his way on one thing or is questioned on another he grabs his pen to issue an executive order.

A “counter punch” to appease his bloated ego, punish, and convince himself he is in charge, executive orders that will indiscriminately impact even the faithful.

But not to worry, when that day comes they’ll blame it on the “Illuminati”, “Reptilians”, or “Mexican rapists” and refugees.

Like their boy they’re one trick ponies and that’s all they know how to do ….. old habits are hard to break.

An additional link that provides a little levity.