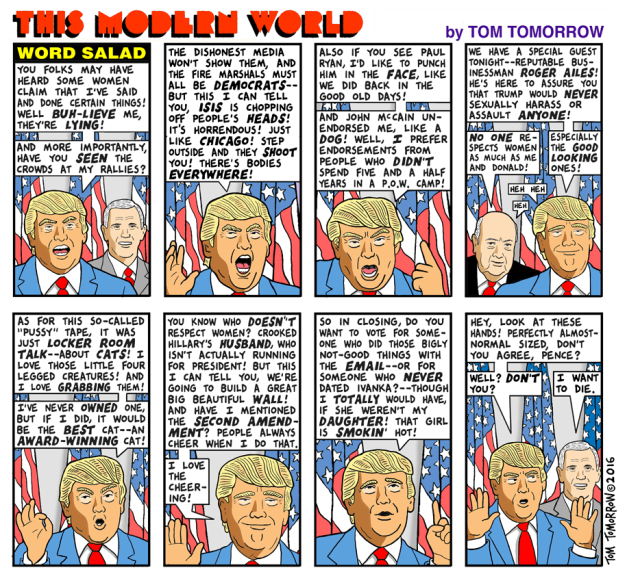 I don’t believe word salad is an asset nor an enviable talent to cultivate – that is unless you’re a political operative or a clueless national “leader”.

When that’s the case word salad becomes your bread and butter – a keflon vest to fend off incoming questions and those ever so troublesome facts.

This is an administration that prioritizes the ability to lie with a straight face, to conflate to a degree where no man or woman has gone before.

And while unlike that opening Star Trek line of boldly going where no man has gone for before the boldness cannot be denied, a boldness predicated not on courage but rather fear of exposure and accountability – a boldness of in your face arrogance and sense of entitlement.

A boldness predicated on how far the envelope can be pushed, how many disastrous executive orders there can be, how much can the working class, seniors, and children can be deprived of before the house of cards collapses, how long before the clueless actually get a clue.

In this prioritization an equal opportunity exists for women in the job place that rarely exists elsewhere.

Man or woman from Sean Spicer to Kelleyanne Conway, Susan Huckabee, or Betsy DeVos – if you are a word salad adept welcome aboard and god bless America – even better if you’re a blood relative.

This is the equivalent of the televangelists creed of give even when you have little or nothing to give, accept the ensuing trouble and grief as god’s will, or in this case the will of Trump and his conservative cadre of national Judas’s and in doing so with unswerving faith believe that the bread of personal security or your own need you have cast upon the waters of deception will come back to you multiplied many times over.

Give as these high rollers live in the lap of luxury that the sweat of your brow will pay for and don’t trouble yourself about the daily outpouring of lies, consider it to be little more than in the acceptance of them you are rendering unto Caesar what is Caesar’s.

No narrative attempting to address the issues of genocide could hope to come close by omitting the presence and effects of cultural genocide, something very much in vogue in this day and age.

If you wend your way through the names of those involved in the star knowledge crowd it reads like a fifties b grade western – very Hollywoodish.

“Chiefs” abound, they even make a point of wearing what they believe to be the appropriate head dress and attire to promote their position.

The words eagle, light, and star incorporated into a name are anything but coincidental or an anomaly, it’s almost as though they are thought to be obligatory, maybe they’re merely a stage name though, something common to performers, as star knowledge is all about theater and performance.

They’ve got something for everyone from UFOs to having cruised the galaxy as a guest of aliens and then enlisted to spread some profound wisdom only aliens possess.

Dreams? Oh yeah, long on that and a requisite. Not just your ordinary dreams, but prophetic, visionary, coupled with an obligation to if not profit from them then in the least anoint yourself as a herald and spread the news.

But wait, that’s not all, like one of those marketing ads on the tube they offer something for everyone. Included with your alien star knowledge package there are also “reverends” and “prophets” available to alternately counsel or promote a book they may be selling.

They may even have a “prayer line” for calling in prayer requests, orders, and donations – if so probably one manned by wise “grandmothers” versed in the medicine ways.

A hard sell, still not sure it’s enough? Not a problem – how about a crystal trinket? No, it’s not directly from the Holy Land like the trinkets televangelists offer but you can rest assured it’s a genuine native american crystal, and if you’re really lucky it’s been “blessed” by one of the “chiefs” or “prophets” – may even comes with an invitation to a conference featuring crystal skulls and those chosen to care for and interpret whatever message it channels from time to time.

Can’t really attend a function? Then how about a dvd set containing all the wisdom you’ll otherwise be missing out on? Can’t really afford it right now?

Not to worry, put it on the credit card as a convenience so thoughtfully provided and shipped directly from an incorporated commercial enterprise. It isn’t about the money, no it’s about enlightenment and assisting you in your quest to understand the mysteries and be all you can be.

Now when you view the cost of these videos it’s becomes obvious that the target audience isn’t indigenous people – so as an act of brotherly or sisterly love maybe you’d want to consider purchasing two, one for you and one for one of our people so they too can understand what our beliefs and traditions are really about.

A little known fact but something long a tradition among our people – we used to kill buffalo and fashion curios from the bones and horns to sell …. mostly in the form of stars or miniature skulls based on designs given to us by “star people” – of course we didn’t have the convenience of the internet so we had to rely on things like a travelling snake oil show, not as much bling as current versions but hey, it’s all we had to work with.

Now you’d of thought maybe those aliens would have provided a way for us to distribute our wares, but they didn’t, and spilt milk now. Or maybe since we were among their chosen elect they could have assisted us against invading forces – maybe there’s a story related to that in not following their teachings we had to suffer the consequences on a generational level, sins of the father and all that.

Maybe being the enlightened superior beings they are engaging in any act of war or violence is anathema to them. If so I’m okay with that, but not even providing something like one of those Star Trek force shields to preserve and protect?

We also had to make do with actual bone skulls as we didn’t have the necessary technology to create crystal ones. Yeah, yeah, I know, our kindred built the pyramids aided by aliens, levitated massive stones in place, and yet we never produced a crystal skull. Go figure.

But if we had of, if we had the ability to sell videos, crystal skulls, and author books as a way to transmit both our sacred knowledge and that given to us by “star beings” we could have by now developed a cottage industry into a manufacturing megalith and unemployment and poverty wouldn’t exist for any of us  rather than a select “enlightened”  few.

We did inscribe certain things on rock faces that became known as petroglyphs but soon discovered there were too many issues when it came to shipping and delivery so that didn’t really work out. Nor was tourism and national parks the boom then it is now.

Guess we didn’t possess the necessary business acumen or perhaps felt it better to remain true to who our ancestors had been, the things they taught us – all of which goes to resisting the revisionism I spoke of in the previous blog.