That’s all it takes to verify Trump’s assertions that he was wiretapped by the Obama administration, and McCain isn’t the first to say so.

The problem is it would put an immediate end to Trump’s claim – he knows it and his cohorts know it.

As a device to distract it serves a greater purpose to call for an “investigation” than to make a simple call and have to eat crow and look like the idiot Trump is.

Remember the call to investigate the “millions” of “illegal votes” that allegedly cost Trump a majority win? How’s that going?

Give it another week or two and another issue will arise that Trump will attempt the same tactic with.

And why shouldn’t he? I mean after all it all works among his supporters.

He expects them to ignore the fact that over seventeen separate agencies announced his election fraud claim had no basis in fact, and they’ve done exactly that.

The same agencies have said the same regarding his wiretapping claim.

McCain said there are two options – either Trump retracts the accusation which would never happen, or to provide proof – which isn’t going happen either as there is none.

There’s actually a third option knowing that Trump can fling some feces on the wall and his supporters will scoop it up and run with it – which is what’s happening.

It’s really amazing that in the midst of proclaiming the media an enemy of the people a story like this would emerge from Breitbart of all places and anyone would actually believe it.

I suspect it won’t be long before Trump labels individuals like McCain and Lindsey Graham enemies of the state.

The above photo says it best.

The latest news updates related to the global brain eating zombie menace is that they are congregating in Washington D.C. and the solution has been found.

A mass die off is taking place due to a lack of nutrition.

And a shout out to bearspawprint for providing the good news. 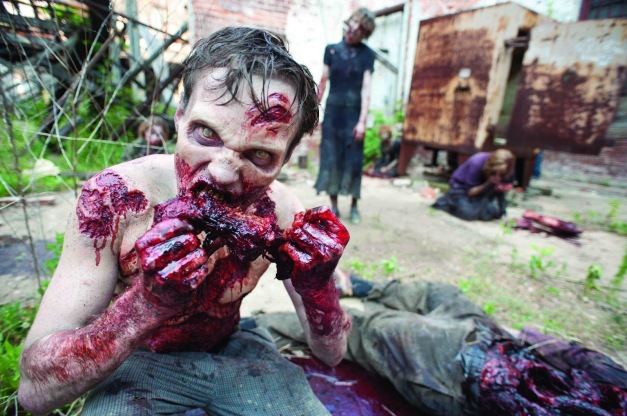 I heard there was another “Pirates” movie in the offing, and If history is prologue no doubt there will be a prequel at some point as well.

That’s kind of the way of things, as long as there is a market what sells will be churned out until consumers weary of it.

Successful movies that generate sequels are referred as to as franchises, and will be milked to the point of redundancy – inevitably attendance and revenue decline, characters lose their cachet, and scripts no longer captivate.

That seems to be the way of it with the AIM/Peltier genre – too much exposure, too many bad scripts, and fewer venues to debut the next offering.

The AIM/Peltier franchise is in decline as the gross revenue indicates, audiences just aren’t willing to pony up the price of admission any longer and the principals are reduced to modern day versions of Norma Desmond insisting they retain relevant star quality and at the zenith of their ability to convincingly assume a role.

Maybe it’s time to segue into the zombie genre as they’ve certainly fed on the flesh of others either directly through the act of murder or in pimping the poverty of “their people”.

Since the name Umbrella Corporation has already been taken in the franchise Resident Evil they could be portrayed as the Blanket Corporation and with a little “artistic license”either Banks or Peltier with  help from makeup and wardrobe could assume a character comparable to the role of Alice as played by Milla Jovovich rather than being featured as part of the zombie mob.

Just a thought, but they do have contacts in Hollywood so why not?

I have a mental image of Russell Means and Vernon Bellecourt rising from their graves to wreak havoc and generally run amok much the same as they did while among the living.

Yeah, I know, Clowns as Zombies….it’s been done before, but as a low budget straight to DVD release it might turn a profit.

Claypoole goes on about what an epiphany it was and should be for her readers that within fbi investigation files into the murder of Annie reports can be found that she was seen alive.

What exactly is that supposed to mean-that they believed she was  alive and withheld it, preferring instead to endure accusations for decades that they murdered her? That certainly seems to be Claypoole’s less than subtle intent.

Likewise I’m confident that if access were possible to files related to Hoffa for instance, similar would be found as well-it’s an established defensive ploy by the guilty to spread such rumors and the design is solely that of misdirection.

Are we now to believe that both Annie and Ray are alive and well and during the passing of decades are so callous as not to make a single  attempt to contact their families and ease the suffering?

What’s next, they are both working for Elvis in a little mom and pop store in Detroit?

Well here’s a clue-they are both dead-both murdered by AIM-and oh yeah, Elvis is dead as well despite all those “sightings” to the contrary.

It should be apparent that there is a major difference between ignorance and hallucinations-though they often seem to go hand in hand.

It should also be obvious that the dead don’t rise and walk among us inspite of the current zombie craze-to imply that such is possible is to attempt to hitch a ride clad in a mini skirt-it might have worked at one point but as Claypoole confesses now such is no longer the case.

So I suggest it is time to don a more matronly attire, perhaps even frumpy, forget those free spirited days of romping up and down the highways crisscrossing the country and take a new approach-focus on reality and leave the fairytales for bedtime stories to tell children.

I think Claypoole’s approach is one of optimizing her options-campaign for justice for Annie and at the same time campaign for Graham  and issue  high praise for Vernon and AIM,  so however it comes down you have the ability to say  “See, I was right, I knew it.”